Tweet
Just recently at Eastside Family Health Center we diagnosed a previously healthy man in his mid-fifties with a stroke. This has been a life-changing event for him and for his family. I thought it would be good to review the topic of stroke on this blog.

In the USA there are about 700,000 strokes per year. Most of these are caused by a blockage in a blood vessel. Early treatment of stroke can reduce brain damage that occurs for this reason time is of the essence. Here, time equals brain lost or gained.

Ischemic strokes are those caused by a blockage in one of the blood vessels that supply oxygen to the brain. If the blockage is not relieved after just a few minutes, the brain fed by that artery will become damaged.
Embolic strokes occurs when a blood clot travels from one part such as the heart to a smaller blood vessel in the brain. This is called an embolus. One of the most common causes of an embolus is an irregular heart rhythm called atrial fibrillation.

Intracerebral hemorrhage is bleeding in the brain. The blood is an irritant to the brain and puts pressure on the surrounding tissue. Some common causes of hemorrhage include: high blood pressure, injury, bleeding disorders, and deformities of blood vessels such as an aneurysm. 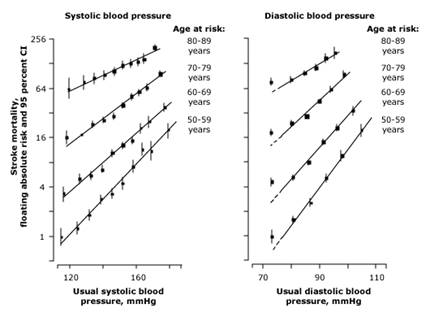 There are a number of risk factors for ischemic stroke: age older than 40, heart disease, high blood pressure (defined as any blood pressure higher than 110/60 ) , smoking, diabetes, high cholesterol, illegal drug use, recent childbirth, TIAs( stroke symptoms but with no evidence via CT or MRI that resolve with 24 hours), obesity, or past history of blood clots.

Risks for hemorrhagic stroke include: high blood pressure, smoking, cocaine use or use of blood thinners such as warfarin.

As high blood pressure is a common risk factor here is an interesting graph showing the relationships between increasing blood pressures and age to stroke risk. You can’t slow down your aging but we all can watch our BP’s!

Dr. Frank Marinkovich owns and operates Eastside Family Health Center in Kirkland, WA. Serving Kirkland and the Eastside, Seattle, Bellevue, Renton and the surrounding local communities. Specializing in Primary Care, Automobile Accidents and FAA physicals. Visit them online at Eastside Family Health Center or call them at (425) 899-2525.
LIKE us at Facebook!
FOLLOW us on Twitter!
Posted by Dr. Frank at 7:47 AM

Dr. Frank
Dr. Frank joined Shoreline Family Medical Center in 1991 as an internist and continued there until 1999. In 1999, he established Eastside Family Health Center, and he has had a thriving practice ever since. Dr. Frank enjoys internal medicine, but he is also involved in several other areas of healthcare as can be seen above. He practices rigorous preventive medicine, with a focus on preventing heart disease. He loves occupational medicine and enjoys caring for many of the region’s firefighters and pilots. However, all of his interests are based upon the foundation of his strong internal medicine training. Even his sports medicine is practiced with internal medicine at the core. Dr. Frank volunteers at the Rotacare free clinic in Bellevue, and regularly leads medical missions to Kenya and South Africa. He also co-founded Kingdom Medical Missions International in 2006.

Order your copy of my latest book, Marketplace Priest. Click the image above to be taken to Amazon.com